My schedule ended up being a little off this week since my evenings have been hectic, which is why the Monday/Thursday update was interrupted. Next week we will be returning to our regularly scheduled program. I promise.

In the meantime, I wanted to revisit the potluck discussion we touched on last week. Best potluck main dishes — what are they?

When my mom and I were discussing potluck dishes, the chili wasn’t the only one that sprang to mind. I also thought of this Chicken Pot Pie recipe that was recently published from, of course, Cook’s Illustrated.

I’ve cooked a few pot pies in my life and eaten even more, and I’m convinced this is the definitive recipe. Yes, the sauce is magnificent and the veggies are amazing. But most importantly: It has the most amazing crumbled crust on top. Yep, I said crumbled.

For starters, the crust can be made entirely in a food processor. To ensure that it stays super crispy, it’s baked twice. Mmm…

Now before we dive into this, I need to tell you — this recipe is a time commitment. It’s something you make on a weekend only when you’ve got a couple of hours to burn.

But it’s so very, very worth it.

1. FOR THE CHICKEN: Bring chicken and broth to simmer in covered Dutch oven over medium heat. Cook until chicken is just done, 10 to 15 minutes. Transfer cooked chicken to large bowl. Pour broth through fine-mesh strainer into liquid measuring cup and reserve. Do not wash Dutch oven. Meanwhile, adjust oven rack to upper-middle position and heat oven to 450 degrees.

So here’s my set up for the broth. I strained it out into a mesh strainer and caught little bits of fat:

So there’s a very good reason to strain the broth, and it’s not just to eliminate more fat. Texturally, that stuff sucks, especially when you’re trying to make a silky sauce.

I did this all in the food processor, which made the whole thing painless. Pulse butter into flour mixture until it resembles coarse cornmeal. Stir in Parmesan. Add cream and pulse until just combined.

My topping was still looking like a fine powder (because of the processor) so I stuck my fingers in there and pinched spots, just to make sure it was damp and “clump-able”.

Crumble/clump mixture into irregularly shaped pieces ranging from 1/2 to ¾ inch each onto parchment-lined rimmed baking sheet.

Bake until fragrant and starting to brown, 10 to 13 minutes. Set aside.

Couple shots of the finished product, so you can see that it’s still pale but slightly crisp in the middle, and the edges are just a little browned.

Do NOT bake this until it’s entirely crispy, because it’s going to bake again. This initial baking will keep the crust from soaking up all of the sauce and getting mushy, and will allow it to all crisp up nicely in the final baking. If you bake it all the way in this step, it’s going to be an inedible, burned waste in the end.

Remove cover and stir in soy sauce and tomato paste.

I know — the soy sauce and tomato paste seems a little out of place for a pot pie but trust me. Do it.

Increase heat to medium-high and cook, stirring frequently, until liquid has evaporated, mushrooms are well browned, and dark fond begins to form on surface of pan, about 5 minutes. 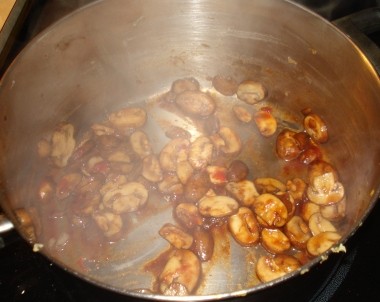 So you can see that there’s a difference between this picture and the one above it. In this final mushroom shot, there’s a really nice, thick broth that’s formed. Don’t stop cooking the mushrooms until you start to get that nice, thick broth.

Transfer mushrooms to bowl with chicken and vegetables. Set aside.

5. Now for the roux, which will turn into a delicious, velvety sauce. Of course it’s a montage shot! You’re surprised?

Heat butter in empty Dutch oven over medium heat. When foaming subsides, stir in flour and cook 1 minute. Slowly whisk in reserved chicken broth and milk. Bring to simmer, scraping pan bottom with wooden spoon to loosen browned bits, then continue to simmer until sauce fully thickens, about 1 minute. Season to taste with salt and pepper. Remove from heat.

Bake on rimmed baking sheet until filling is bubbling and topping is well browned, 12 to 15 minutes. Sprinkle with parsley and serve. 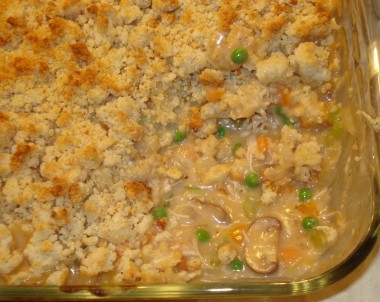